Mixing it up on Big Reds PPB 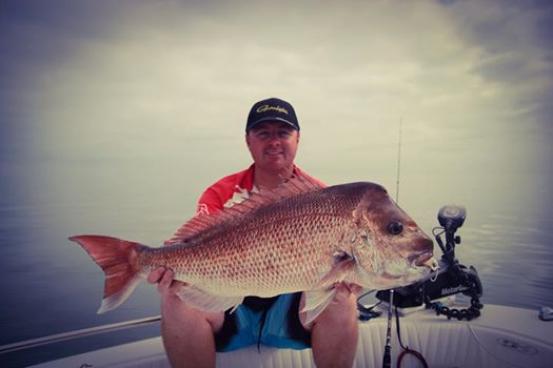 On a recent trip to Port Phillip Bay targeting snapper we mixed things up a little bit with some pretty crazy results. Generally I like to target snapper on artificials, soft plastics, vibes etc. On this trip though I had snuck a few extra rods onboard to put some baits out at the same time.

Spending a considerable amount of time looking at the sounder trying to locate feeding snapper close to the bottom in 20m of water we hit pay dirt marking some large fish in close proximity to each other. In relatively calm conditions we deployed the electric motor and hit the ‘Spot Lock’ button. This eliminates the need to drop a noisy anchor to the bottom of the sea bed and upset any fish below. Baiting one rod with a whiting head and another with a squid head both on snelled Gamakatsu 5/0 octopus hooks they were both cast out the back of the boat and placed in the rod holders, With the reels left in gear so the fish could swim off with the baits and hook themselves. We had plenty of room out the sides of the boat to cast and work our Soft Plastics. Given there was quite a bit of bait also marking in the area we used Atomic 5″ minnows and 4″Atomic Prongs both on 1/4oz jigheads. We were still waiting for our soft plastics to get to the bottom when the rod with the whiting head buckled over, after a quick tussle a snapper of around 4kgs was boated. This set the tone for what can only be described as snapper mayhem, over the next couple of hours the fish just kept coming both on the baits and artificials. The size of the fish was also well up on average with fish generally over 4kgs and up to 8.5kgs. In all both techniques worked well with squid heads faring better in the bait department and the Atomic Prong dominating the Soft Plastic tally on this occasion, fishing it very slowly and letting the twin tails flutter slowly back to the bottom induced some vicious strikes. Having reached our bag limit and not wanting to hurt any more fish considering the depth we were fishing we packed up and finished the day off with a quick bag of squid.

HOW TO USE ATOMIC PLAZOS ON THE REEF
December 16, 2014
Categories
Go to Top